If Hamlet were our contemporary, he would no doubt ponder even more readily now than before, "What is this quintessence of dust?" Quintessence is the fifth part, an alchymeic portion that represents something that is saved out of the purification process. These days, 80 percent of the gross matter that constitutes our lives is being drawn out in a massive extraction process and what is left, hopefully, is the province of the soul. It takes is most precious portion and leaves the rest.

In this field of emptiness we now wander somewhat listlessly, knowing that it will end, or if it does not, we will end. That is why we are here, to close the book and try to understand the meaning of what we just read.
Posted by Doug Mackey at 12:45 PM No comments:

Off-Base in An Unreal Reality 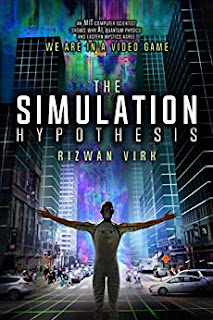 The Simulation Hypothesis: An MIU Computer Scientist Shows Why AI, Quantum Physics and Eastern Mystics Agree We Are in a Video Game, by Rizwan Virk. Bayview Books, 2019.
A two-letter word recurs time and again in Rizwan Virk’s book The Simulation Hypothesis. It is the structure upon which his elaborate edifice involving game design, quantum physics, and the philosophy of consciousness is built. It makes possible great leaps of the unfettered imagination. It defies logic while conjuring up the leading edge of science. And that word is “if.”
IF quantum theory can be explained by the presence of an infinite number of alternate universes…IF human perception can be authentically simulated in an artificial consciousness…IF technology can advance fast enough for this amazing vision to be realized while humans still inhabit the planet…then just possibly that layer cake of IFs will actually get baked!
To invoke the name of Philip K. Dick, as the author frequently does, is to tackle the vexed problem of authenticating reality. Just as Dick’s characters find themselves questioning the reality of reality itself, Virk takes seriously the idea that we may be living in a made-up phenomenal simulation similar to the virtual realities in the games he himself designs.
Let’s say that all the layers of IF are true. The probabilities argue that there is a better than infinitesimal chance that the world is a simulation. It may not prove to be a big videogame in the sky, it may be something like nothing we ever dreamed of. There’s a chance that there is a master artificer intelligence operating somewhere in the multiverse. In that scenario, huge branches get created exponentially in the cosmic tree of possibilities as simulations beget new simulations. So the probabilities are excellent that we are one of those simulations and not really living at all in “base reality.”
Along the way as you read The Simulation Hypothesis you’re going to learn a lot about the history of videogame development, the frontiers of the physics of spacetime, and why UFOs and near-death experiences and angels reinforce the hypothetical uber-reality we all may inhabit.
All his is delivered by Rizwan Virk in a clear, readable style that is one of the best expositions of this kind of quantum-speak I’ve seen. I’ve read countless explanations of Schrodinger’s Cat and the Dual Slit Experiment in other books. You might have too, and are tired of hearing about them. There is a point to revisiting them to entertain this simulation hypothesis. However, it’s not that the paradoxes of time travel and quantum superposition are going to finally make sense. That’s not what we’re about here. We’re in the grip of a brilliant thought experiment. Nothing is proven and nothing is rejected. Let’s move on.
This book is not just a mind blower, it is a mind tornado. It forces you to take seriously the unreality of reality. It plunges you into the wildest dreams suggested by science fiction and the most extreme speculations of quantum physics. You pick up this book, check your skepticism at the door. You’re going to travel on Spaceship Einstein with a stopover in the mystic East as you plunge into the videogame that is your life. Happy landings!
Posted by Doug Mackey at 1:12 PM No comments: 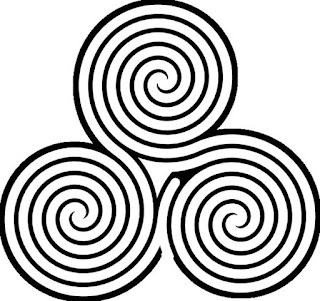 If we regard time linguistically as a network of semantic moments, a labyrinth that is fundamental to yet independent of chronological superstructuring, we enter a training ground in which we are invited, like children, to devise our own grammar before anybody attempts to teach it to us. In encountering an event, we are stopped like glottal resistance points in a speech performance. These resistances must be digested, the deep structure meaning absorbed like a cough drop in the mouth. Eventually a rhythm emerges from the irregular swoops of hovering intelligence. Spherical music unfolds from the luminous arcs that describe the landscape of event structures. It is a feast of total comprehension, as we sink our temporal lobes into the momentous essence, tunneling through the data-rich loam of depth understanding.

Posted by Doug Mackey at 9:47 PM No comments: 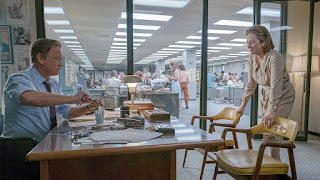 Seeing two new movies The Post and Darkest Hour on consecutive nights, one is struck that both these retellings of decisive historical moments in 1971 and 1940 have a lot in common. The former is about the publication of The Pentagon Papers in The Washington Post, revealing government lies about the Vietnam War over several administrations;Tom Hanks as Ben Bradlee and Meryl Streep as Katharine Graham are at the top of their game, as is director Steven Spielberg. The latter film is about Churchill's refusal to knuckle under to Hitler around the time of Dunkirk, despite political pressure to make peace. Gary Oldman superbly evokes the inspiring oratory and fallible human depth of the revered Prime Minister. Both decision situations required unflinching courage in the face of considerable opposition. 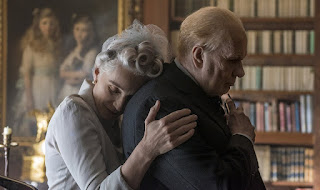 Both films by implication may be read as commentaries on the present political situation in the United States. It is the absence of the principled leadership portrayed in Darkest Hour that one feels keenly now. In fact, the war we are in at present not being fought on the beaches but in the cyber-impulses that are flooding our air space. And the matter of "who is the enemy?" is looking very much like our own commander-in-chief. The characteristics of a great leader may be very much the same as they ever were. The lesson here is in what we have lost.

The Post may be seen as "Hollywood Strikes Back" against the attack on news media and the First Amendment by the present administration. I think we have here an instant classic which may have been designed to be so, and may echo typical liberal ideas, but is nonetheless effective for that. What is plainly delivered here by the artists' representatives in our society is that this shall not stand, that the ideal of free speech is what this country is all about, and that lying by governments will not be tolerated.

It is never that simple, of course. The media have often been used to control and misinform the public. Whether more often than not is a matter of debate. Let us see these two films as a history lesson, so as not to forget the moments when leaders had actual integrity and courage, and news media were not afraid to speak the truth. If it happened before, it can happen again. And in fact right now it is happening again, daily in the pages of the Post, many years after their 1970's moments of glory. Attention must be paid: the Fourth Estate is stepping up to the plate.

Why this downward trend, this trailing away into nothingness? Am I becoming inarticulate? Should I be talking about the brilliance of Twin Peaks or Doctor Who (trying to preempt generations of commentators)? Should I be detecting the influence of Van Gogh's style on Shakespeare (because I believe these things work backwards in time)? Should I spout off more of my deranged metaphysics such as what I wrote in 2005?

I probably should say, write, and do a lot of things I don't. Perhaps in 2018 I will be more successful at the Problem of the Unwritten Blog if I just grasp for transient moments of insight or inspiration rather than codify eternal pronouncements of infinitude. Perhaps that will be my New Year's resolution, to do just that. Prepare to be surprised. Or not.
Posted by Doug Mackey at 7:22 PM No comments:

Wonder where you can get it

I discovered some brief comments I wrote after seeing the much maligned Jupiter Ascending in the theater last year. Even now I see that Rotten Tomatoes gives it only a 26%, which to me is positive proof that critics who are not versed in the history of the various genres of science fiction really are not to be trusted when it comes to reviewing sf films. Not to lose track of my comments, here they are:

"The epic science-fiction movie Jupiter Ascending has not made it unscathed through the critics' gauntlet; it wears a giant red spot as its badge of honor. Directed by the Wachowski brothers, who created The Matrix and Cloud Atlas, this new film has been widely greeted as a bull to the reviewers' swords, who have themselves contributed a fair amount of raging bull to the discussion. Most of the critics begin with the tedious assertion that this movie is a rip-off of Star Wars and its innumerable clones. Although its roots in pulp fiction are usually mentioned, I wonder how many have actually read pulp fiction as it was practiced in the 1930s and 40s, or are familiar with the quality fantasy artwork from that period. How many have experienced the vaunted "sense of wonder" which was the genre's original raison d'etre? This film is not some smart-alecky pastiche of this artistic and literary form. It evokes the original spirit of the genre like no other film. Nor can the superlative art and special effects of Jupiter Ascending be divorced from its content. As in The Matrix, in Jupiter Ascending mankind is being harvested for its life-essence, but rather than by scary machines, this time it is by immortal humans living in a parallel dimension on a world that looks exactly like the planet Jupiter."

Much more could be said. In the meantime I would refer you to the Blu-Ray and to this excellent review.
Posted by Doug Mackey at 12:32 PM No comments:

Message on the matter 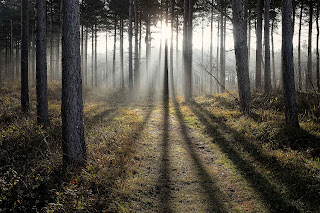 Immanent indolent full tide of May
Try to deliver the present with sleigh
Summer no snow puts man on the skids
Aggrieved to store nuttings in jars without lids.

Tried on for size the great gown does not fit
Only can fashion itself to be knit
Into the fabric of all space and time
Including what seems to be rightfully mine.

Stringless pluckers and songs without voice
A bad combination yet what is the choice
Is it better to buy what you still do not have
Or spot a bright copper on the road to the path?

My hand finds the handle the coin springs to touch
I discharge it to you though it doesn’t mean much
But maybe some child will one day depend
In the meantime this child says hello to the end.